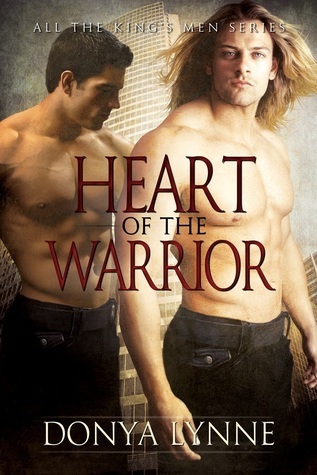 Heart of the Warrior (All The King’s Men #2)

I had already liked the first novel in the series and it took me a while to work up to reading this because it centered around the male enforcers I got a glimpse of in that book. I have never read a romance where it centered around two men before, but am really glad that I got to read this one. I was so pulled into this from the beginning and it totally surprised me how much I got into it. The characters were so real in their feelings and reactions that I found myself sympathizing with them or being mad when they did something totally boneheaded. The romance was sweet with a serious hot edge that surprised me, since I got totally sucked in, who knew I liked two guys together. The world they inhabit is well defined and in a known place which makes it even easier to identify with. The fact that they are vampires is secondary to everything else that goes on with them. This has opened me up to the possibilities and made me more open to try more in this vein, hopefully just as well written.

Severin has been pining away for Arion since their encounter in Ari’s kitchen six weeks earlier and does not know what to do. He has to see him every night at work and it seems that their brief contact has not affected Ari in the least. Arion has always had a hard time having relations with women but things were so different when he had his short lived encounter with Sev, it was explosive in more ways then one. Both of these men have secrets that they are trying to keep hidden from each other, friends, and family. This may be important to them but other factors are conspiring to make their lives even more difficult.

With cobalt use rising to epidemic proportions things are getting crazy on the streets for enforcers. Severin has more than his share of trouble brewing, his last boyfriends sister is looking to kill him and he has no idea when or where she might show up, his hated father is trying to make amends for his contemptible actions of the past and he wants none of it, and keep his lineage a secret could work for or against him. But with all that going on his main focus is Ari and how he can get him to love him, because the calling is upon him and he must have his mate.

I loved these two men together because they were hot, sweet, and so good for each other. Their romance was hard won and hard fought with family and friends who would not understand, and support from the most unlikely place. This book is more than worth the time as is the first book if you have not read it “Rise of the Fallen” is perfect. I am recommending this highly!! But be aware that there are multiple explicit sex scenes between our two hunky vampires. Very tingle worthy to me! MM Romance

**As I have done with the previous book I listened to this for my second time and enjoyed it just as much as the first. The narrator, Mikela Drew did a wonderful job with all the characters which enhanced the story. I remember feeling a bit squeamish when I first started reading this book but only found a very nice story in the end.

Yeah, I ain’t no human mix. Sev clapped his hands together in dust-off fashion and stood up. Good ol’ Dad had been a full-on, full-blood, virile vampire. Extremely powerful. And a jackass. Sev had only met his father once, but the meeting had left an impression when the two had nearly beaten each other to death.

Sometimes Sev felt guilty for what happened to her, as if he was to blame. They had to keep their relationship a secret because it would cause them both too much pain if people knew they came from two separate sides of the old war. She would be ostracized by the drecks if they knew she had kept a vampire’s offspring and carried it to term rather than kill herself. He would be seen as a threat or a dreck sympathizer if his teammates or other vampires learned of his half dreck bloodlines. This was what they called being between a rock and a hard place.