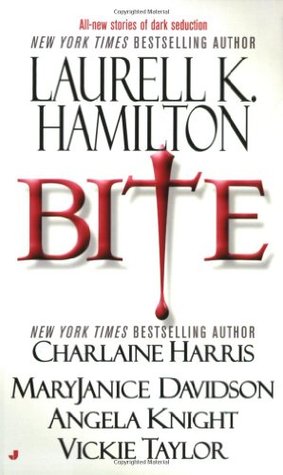 by Laurell K. Hamilton , Charlaine Harris, MaryJanice Davidson , Angela Knight, Vickie Taylor
My rating: 4.6 of 5 stars
Each story was very different from the other and while I liked some better than others I was still kept entertained by them all. The stories are all supposed to be based around vampires and lust, but only a few actually hit upon the lust.

‘The Girl Who Was Infatuated with Death’ is an Anita Blake short that takes place between Blue Moon and Obsidian Butterfly, which means Anita is still fighting her attraction to Jean-Claude, silly girl. A mother comes to Anita asking for help in finding her daughter before she can be turned and Anita goes to the one person she claims to want to avoid. While the heat level could have been higher I give it 5 stars for just showcasing Jean-Claude, who could have me with a look.

‘ One Word Answer’ is a Sookie Stackhouse short, very short, that does not really give much of anything. Bubba is present as well as Bill but this is about a cousin who is mentioned only briefly and does not really affect things one way or the other. The Queen of Louisiana sends two of her men to inform Sookie that her cousin is dead and has left her a legacy. This was a bit bland with nothing to really make it a true part of the overall story. I gave this 4 stars for at least having vampires in it.

‘Biting in Plain Sight’ is a Queen Betsy story. I really like these shorts with the dippy Queen, you always get to meet some of her more interesting subjects. Dr. Sophie is a veterinarian in Embarrass, Minnesota and has been for the past 40 years, not that anyone mentions it. It seems that one of her clients has had a crush on her since he was a little boy and now he is ready to act on it. The only problem is she is going to need to see the Queen because a vampire is being bad. I gave this 4.5 stars, it has a good story along with a little lusting going on. There are some laugh out loud moments as well.

‘Galahad’, is a great story and I am glad to have found this author who I have never read before. Caroline has only recently been turned into a witch and transported to Avalon, which is in another dimension. She starts having visions which show her fighting beside a very handsome vampire which she cannot ignore even though she would like to. This was a story that had everything as advertised, hot vampires, sex, and action. I gave this 5 stars and will be looking for more in the Mageverse.

‘Blood Lust’ is another story with an author I have not read before but will  in the future based on this. Daniel Hart is a scientist who has been working on synthetic blood in order to benefit mankind. He gets backing from a man who turns out not to be what he seemed and who steals all his research leaving him broken and battered. When he is healed he goes looking for revenge and finds much more than he expected. This got 4.5 stars because it had just the right mix of romance and vampire intrigue.

I would definitely recommend this book to vampire lovers. 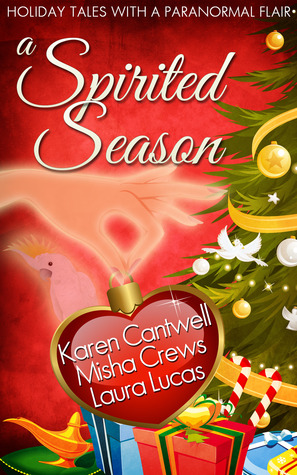 by Karen Cantwell , Misha Crews , Laura Lucas
My rating: 4 of 5 stars
All the stories were fun without the need to have any darkness creep in with paranormal elements. They were light and maybe a little frothy but definitely entertaining and full of holiday spirit. The writing is great and flows along at a great pace from story to story even though each is different and unique.

“A Christmas Peril” is a play on the classic “A Christmas Carol” which finds Barbara Marr being visited by 3 very scary ghosts just before Christmas. It gets so bad that she stops sleeping and throws her whole life into disarray. Getting to the bottom of her haunting makes for a very interesting and surprising ride.

“Make My Wish Come True” finds Delaney Pearce doing her Christmas shopping after a bad breakup and making wishes the whole time, but of course not expecting them to come true. What she doesn’t know is that she has a genie who is listening and willing to give her all the things she wants. But does she even know what she truly wants from her life?

“Two Turtledoves” is a nice story about an antique that helps to bring two lonely people together during the holidays even as they feel they do not need anyone. This was a sweet tale of how loneliness affects you and what can bring happiness.

“Squawkin Around the Christmas Tree” has a jealous husband who turns to witchcraft in order to find out if his wife is cheating. What he finds out is way more than he had expected and got back something he had lost.

“Jingle Spells” Kendall Rhodes was having a Christmas Eve party because she had been fighting with her father and did not want to see him. Her friend Delaney was in attendance as well as a guy that she really liked. When the lights go out she cannot figure out what is going on and then is told that someone has placed a spell on her home. But who would such a thing and why? The fun is in finding out the culprit and what secrets are revealed because of it.

“O Christmas Tree” On Christmas Eve three men a working to repair a cell tower near some woods. One man has no family and while he is in no hurry he wants to get his friend’s home. But he finds that sometimes love and family can find you when you least expect them. A love story for the holidays.

Each story gives a feeling of the holiday that we sometimes forget about but need to feel. These made me smile and just be glad that I don’t have to worry about the supernatural during my happy season. Enjoy!

I was very pleasantly surprised when I started reading this. Not only do we have short stories but the added bonus of an excerpt of the book the short is based on. The stories vary in length as well as genre but all are from fairly new authors with a twist. While I enjoyed all the stories, I have to say that two were my favorites, though I will now be purchasing all the books the shorts were based on. Oh my straining budget!

I would love to lay out each story for you but that would be silly since you could simply purchase and read them for yourself. So instead I will give a brief synopsis of my two favorites.

Legacy Lost by Anna Banks is a story about mermaid people who reside under a thick ice cover. They have two kingdoms which in order to stay united pledge a child to marriage. In this case Grom, a prince of the Triton’s has been told he must marry Nalia, a princess of the Poseidon‘s. Since he knew he as a child and did not like her he is less than thrilled and she is not any happier since she does not like him either. This is a love story that holds the fate of an entire race in its hands.

In “Dress Your Marines in White” by Emmy Laybourne you have the equivalent of a mad scientist who is so intent on human testing of her killer substance that she sees nothing else. Her assistant is a family man who is so horrified by the results of their human testing (he is going to a hypnotist to forget) is asked to write a report. his report will be used to decide if they move forward or stop the research all together. This is like the beginning of any apocalyptic story, you have a vial of something deadly and the question is, will it get out.

In the past I have shied away from young adult fare but find that some of it is worth reading even for someone like me who is well past that particular phase.

Holidays Are Hell by Kim Harrison
My rating: 5 of 5 stars

This anthology features 4 short stories by some very talented women.

Two Ghosts For Sister Rachel gives us an eighteen year old Rachel before she joined the IS and moved out into the world. We also get to view her home life with her mother and her true start at earth magic.

Run,Run,Rudolph is a fun story with a great romance and tense pursuit scenes. Jill and Nick make a great couple and I want more of them. It was funny,sexy, and very interesting.

Six is set in China and is the name of our heroine. She finds herself up against vampires and partners with a necromancer against her will (at first). She is very strong and makes things interesting.

The Harvest is set in of all places Las Vegas and features a plot of good vs. Evil. Some Archer is an agent of the Light who has dropped out only to return when she needs help from the man she left behind. Their reunion is brief and she steps into danger to secure her legacy.

All of the stories are well written and well worth your time.