I like these stories because they are always sweet and have a nice mystery at the center. The main characters are all well defined while those introduced are still shadowy since they have no real back story. The language is always perfect and a part of the people who use it. I gave this a low star rating because it stated a side story but did not really deliver on it as I had expected. The story itself was actually kind of thin and even though who the perpetrator was came as a surprise, it was mostly because you had no major interactions with the character.

Polly arrives home to find a box on her porch when she was not expecting any deliveries. When she opens it and finds a kitten in pee soaked tissues on a freezing day. After checking with her boyfriend on whether he dropped it off she goes to the Sheriff to give him the diamond bracelet she found around the kittens neck.

Nicole Whittier, a new resident in town , has been murdered and her two step-daughters are missing from the scene. Who could have killed her and why are the girls missing, where is their father, and what does the kitten have to do with it? All really good questions, with some interesting answers.

I think even though there are some flaws with this it is still a good clean mystery story. Good for anyone who likes a mystery without a lot of blood.

This was another good mystery but I had an idea of who the killer was before the end of the first chapter. It was still extremely well written and may not be so obvious to others.

Roxy’s manager has one of his old clients turn up dead and though it is originally thought to be a suicide it soon is being looked at as murder because of another of his clients. David Lone is a client of Oliver who has done very well for himself with both a best seller and movie deal. While Roxy is still angry with Max she starts to have feelings for David, mainly because of his fascination with death and success. Bad Roxy, being so shallow.

But the real problem is that after the first death more occur and it starts to look like poor Oliver is the prime suspect in all of the deaths. Roxy does not need to be asked, though she is, to help her old friend find a way out of his predicament. She does not believe he is guilty even though suspicion has fallen squarely on his shoulders.

I really like these mysteries because they make me work to figure out who the culprit is going to be in the end. I think because I read the fourth book in the series first I was expecting a lot more from this one when I decided to go back to the beginning and it is not bad at all. The writing is clear and gives me a complete sense of what is happening around the characters and therefore me. The language engages and pulls you in even though the slang a lot of the time is Aussie in nature. The characters are all fun with interesting quirks and idiosyncrasies that make them more or less endearing to the reader.

Roxy is invited to Dormay Island by Abigail Lilton, owner and operator of an exclusive resort who has shunned all publicity in the past. But now Abi has decided to write her biography and wants Roxy to ghost write it for her. It is the off-season and Roxy is a little surprised but pleased that she gets to do this book in such an exotic location. The only really bothering Roxy is the fact that she has not heard from Max, even though she is the one who blew him off.

Then the worst happens and Abigail is murdered with suspicion falling on all those in residence at the resort during this time. The local law officer comes to investigate but the daughter of the victim asks that Roxy help in the investigation because she believes the constable will favor the locals if they are involved and so wants an outsider to help. Roxy does her thing as usual and finds much more than a simple murder or murderer for her trouble.

Another great story with a great mystery and some good motives by all of the suspects involved. Definitely recommend.

I am a Marshmallow! That just has to be said, I watched the series and actually loved it because even though I was older than the title character I could still identify wit her. I loved her because she was strong and no matter what happened she was always ready to help someone.

This story takes place after the events in the movie which wrapped up the series. There are some new characters right along side those characters that have come to be so loved from the show. Veronica has moved back to Neptune because she cannot give up being who she truly is, a private detective, even though her father thinks she should. She is also back because of Logan who she is involved with again. The town has become more corrupt in the time she has been away and nothing seems to be able to be done about it.

The business association in Neptune come looking for Keith to handle a case they do think Sheriff Lamb can handle on his own. A girl has gone missing and instead of trying to find her the Sheriff has been caught in sound bites that make it sound like he cannot be bothered. Because Keith is not available they are willing to give Veronica a chance since they know her reputation for solving cases. During this case Veronica also runs into her mother who has a step daughter who has also gone missing and she wants Veronica to help find her.

This was a really great story that had a mystery that was excellent. If you liked the show you have to read this, but better yet listen because it is narrated by Kristen Bell and it is like have Veronica reading you one of her case files. She is phenomenal when it comes to characterizations of the other cast members, including the men. Enjoy this!

This is why I like these books, there are some of the strangest things happening to this woman who was so ordinary not so many years ago. This short gives you a quick look into the life that Sam has built for herself after her transformation into a vampire. She has her business, which is doing very well considering she can only really work at night. Her love life is definitely doing well since she finally decided to give Kingsley a real chance. Most important of all is that her children are happy and healthy and living with her.

Sam has an interesting Christmas going on. Her client needs her to find a safe that he has never opened. She has a man come to her stating that he was her guardian angel but because she is now immortal he can tell her he loves her. How many women get that said from an angel?

I paused and flipped through a historical mystery novel, read a random paragraph, liked it, and dropped it into my own hand basket. For a buck, I’ll try anything. Hell, the Kindle app on my iPhone was filled with free ebooks and .99 cent ebooks that I had snagged in a buying frenzy a few days ago. Now, all I needed to do was to find the time to read them. I’m sure the one about the vampire mom—written, of all people, by a guy with a beard—should give me a good laugh.

I love a good mystery and this is a very good one. I started reading and was unable to put it down because I was so caught up in who could be doing the killing and how it was going to effect everyone around them. This was able to keep me guessing even after I thought I knew who it was. The characters were very real and got me involved in their lives, they are very lively and full of life. The dialogue is easy to follow but does not talk down to you at all and even the technical terms are defined. The story maintains the tension throughout and draws you in as the time ticks away and things become more complicated.

Aspen Falls is a small town in Colorado which has the distinction of having had a serial killer bury his victims within its boundaries. When FBI agent Nicholas Grant finally finds the location of the dumping ground of a the serial he has been tracking for the past ten years,  he thinks that he will finally be able to bring closure to the families of his thirteen victims, what he actually finds is more bodies. Jamie Taylor is brought in with her dog to help pinpoint the graves, she is one of the best in the field, and she found them and a lot more.

What they uncover means that there is another serial killer operating in their small town and using the same area to dump bodies. Now they have to find the culprit before any more people go missing to a killer who leaves no marks on the body and no evidence that will lead back to him.

I think this was a great book and I enjoyed it a great deal. I would recommend it highly to any fan of the mystery/suspense genre.

Grief is a place, even in the most lush surroundings, that is solitary. There is nothing but the loss. 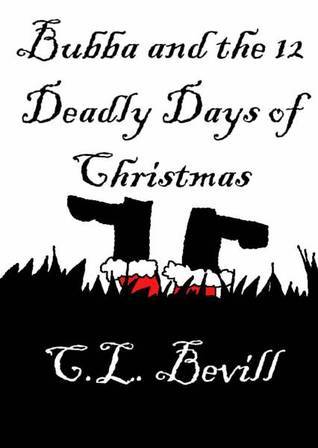 Bubba and the 12 Deadly Days of Christmas (Bubba Snoddy #2)

by C.L. Bevill
I am a bit torn on how to rate this. It took me a while to get into the story because I was so confused as to what was happening, if I had read the first book I would have known though. The characters are all very eccentric but in a fun way that makes you like them. The mystery is a good one because I was baffled the entire time and could not figure who it might be though there were a lot of possibilities. I have never been to the south but the way they were talking I guess could be authentic and it is also another reason that makes them kind of charming.

Bubba Snoddy had a hard time the year before when he almost went to jail for the murder of his ex-fiancee. Now here it is Christmas and as he is heading toward the sheriff station he stumbles over the dead body of a man he had recently quarreled with. It does not look good and he is once again being looked at as the prime suspect in a murder. Soon it comes to light that something sinister is happening in the little town of Pegramville.

When his mother finds another body things just become more complicated. Not only is he a suspect his mother is now suspected of murder as well.

I am going to be reading the first book in this series so that I can get some background on these characters. I also think I want to read the next book at least since it ended with a cliffhanger that I did not see coming. It was an enjoyable read with some good laughs and a heck of a mystery.