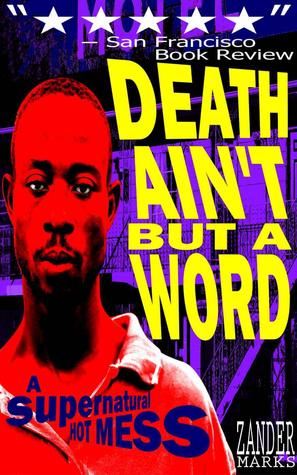 Death Ain’t But A Word: A Supernatural Hot Mess
by Zander Marks

I had heard a lot of good things about this book before I got it and I will say that they were all justified. Now, it starts off a little slowly as it establishes who and what the characters are in relation to each other. And though we meet quite a few different characters they are not all fully fleshed out with a background and such though they still have a vital purpose in the story. The ebb and flow of the story was good and made understanding what was going on and why very easy to follow. Though some might not be able to always follow the conversations, the use of slang is limited and mostly explained when it is used. The idea behind this was just so delicious to me and I guess I could not help but like it, it spoke to me very loudly.

Wilkin Jones is a crackhead but he is so much more than just that and he wishes that he were not. It has been twenty-three years since his best friend disappeared and was presumed dead, but he has kept in touch off and on with him over the years. When the killer comes back and wants to clean up after himself, Wilkin finds that he is in the middle of something that could cause him to step over into the veil for good. He has fought who he really is for years but now he may not be able to do that any longer if he wants to survive.

The thought of a crackhead being the main focus was intriguing to me and it proved to be very entertaining. I found myself smiling a lot while reading this as well as getting a bit weepy at times. Wilkin is a likable guy who I can see myself knowing in real life. Some of these characters remind me of people from my old neighborhood and they were mostly good folks who just fell. I would recommend this to everyone! A different kind of ghost story that brings things into the light.

“Don’t you DARE try that goo-goo-eyed force-be-with-you Obi-Wan Kenobi bullshit with me. I know what time it is. Ain’t about me. I’m a crackhead gonna die behind a Dumpster, nobody miss me when I do. Fuck that. This about him. He don’t deserve this. After all he been through, he do not deserve this. So cut the crap right now. Right now! And don’t piss on my leg and tell me it be raining, ’cause you coulda stopped it. You let it happen. You knew all along, and you were wrong for that. So fuck you and don’t hand me no light saber and play some bitch-ass Yoda. I AIN’T HAVING IT!”